Zero 0 and Earth O represent most basic shape and curve which forms not just Earth but entire Universe, it is a zero-point of energy, a point before materialisation and also shape of Earth, our only home, yet "scientists" argued about zero being a number at all because that would mean admiting something bigger and stronger then their overly blown-up ego.

DECEPTION IS IN THE LANGUAGE
by Lizzy Bluebell

June 12, 2012 at 4:27pm
"And the Word was made God and dwellt amongst them".
The fabled Christian biblical admonition forbidding Adam and Eve to "eat of the Fruit of the Tree of Knowledge" was in actuality none other than a reference to the written word or forbidden "graven image" and to books themselves [book = know-ledger] which were once written on "papyrus".  This Latin word for paper derived from the papyrus rushes (reed/read) which grew on the banks of the Nile, as used for enscription by scribes who were reputedly "worth their weight in gold" for good reason.  Words became "written in stone" on temples, pyramids, and obelisks.  Propaganda became the means of rule for the Pharao/Kings, and later, for the Roman Church itself.  Trees later provided the pulp used to make paper, thus explaining the Biblical Roman/Latin admonition forbidding us to the eat of the "Tree of Know-Ledge".... "for in that day (Dei) you shall surely die". (Day/Dei/Die are the same word in actuality).    English (written) language comes down to us from its original source in Aramaic-Semitic-Hebrew, through Greek, thence Roman/Latin (through scripture), and thence to English, which has inherited much that is non-sense, as well as much that has been trans-formed or 'lost in translation'.  Also, it must be noted here that every single alphabet letter in Hebrew re-presents a complete word in itself, as well as a numerical value, which enables "equivalent values" in radically differing words, enabling multiple meanings and confusion of meaning and intent.  Even the briefest study of the ancient picture-symbols for the 22 Hebrew alphabet letters reveals anomalies which do not make logical sense.  It is time to expose this. For further reference please refer to the charts which can be viewed here:  http://ancient-hebrew.org/30_lesson04.html

The Hebrew .  (a rota-ry is a wheel) When you place letters on the Hebrew ROTA and turn them a-round, you derive different words, such as TORA(h) and TARO(t) and (OR)-ATOR.  But please note that in Hebrew, each letter also has a Numeric Value which essentially remains the same regardless of the alphabetic letter sequence or meaning of the separate word itself. For example the word can also be read as ATOR (ora-tor) or TARO(T) (cards) and TORA(H) (Mosaic or Moses' Law).  ROT itself means Red -- thus = "Red-A" -- which word re-combines again to form the word "READ" (cf. REED).
Each Hebrew alphabet letter also "counts" as a numeral, (0 to 9) while each of the 22 letters also forms its own separate word and meaning. Thus Hebrew language tricks or 'trices' are an ancient device of sorcery and cunning.  We have inherited this He-brew letter-word-numeric-magic  or s.p.e.l.l. in the English language, and it can still be readily traced within the spellings of English words today.
Also of note in this exposition of language, the word "writing" (cf. aural sound 'riting') itself was anciently performed with a "reed" ( lotus reed) which has the identical aural sound as the word "read". This is what I call the He-Brew Alpha-Bet, a language matrix/code inherited by English (as well as other languages) which ensures to this "day/dei" the continuance down through the ages of a Patriarchal ((Pa-Tree-Arch-All)) Dominance, or a He-Brew His-Story told (tolled) by a Fat-Her (or a Thin-King pregnant with his own possibility), known falsely as A-Dam.  While the Hebrew word "adamah" (Adam) is said to re-present the Red Clay from which Biblical Adam was 'formed', the English word "Dam" actually speaks of a Mother sheep, i.e. A-Dam, or a EWE, or EVE herself !!  I propose that EVE, as A-Dam/Mada (Mother, Mudder(clay), Mutter, etc.) must truly have been the Mother of oral language, and it was she, not he, 'Adam', who "named all things".  Thus the true 'father' or Fat-Her (i.e. pregnant one) of the name-ing-kind (e-man-ating) or man-kind was EVE (EWE) herself !!  This makes much more sense when one considers the meaning of the mythical "Holy Grail", (Spanish: Sang-Raal, blood-line) which is often thought to refer to a CUP.  A Cup is a Vessel (cf. Vesica Pisces, Ru/Rho, (), or petal of life, lotus flower) or a 'container', (EWE-R) such as a Womb containing the Water of Life, a 'vessel' which carries the foetus till parturition.  I note also, that modern Science postulates that mitoChondrial DNA is transferred ONLY by the Mother, through her own blood, and it is through her own flesh and blood that the mother feeds the growing foetus (cf. the Christ-ian script "for this is my flesh and this is my blood" at the Last Supper).  Fathers do not contribute blood itself to feed the growing foetus, even when the blood-type of the foetus is inherited from the father. It also has been very recently revealed by scientists that the foetus actually shares its own developing cells back into the mother, who then carries them with her for the rest of her life, along with the cells of all foetuses she subsequently carries, even if they do not reach full term.  This has interesting implicationsm and "proves" scientifically the closeness of the bond between a mother and all or her children, as it can be seen that indeed, they all share cells-in-common.

Conclusion: Spanish "Sang-raal" or English  "Holy Grail" literally translates as "Blood Line".  Thus in my estimation, if Biblical Jesus said "For this is my flesh, and this is my blood", then I must conclude that Jesus, as well A-Dam, was in fact a WOMAN or Womb-ANNA.
(c) Lizzy Bluebell. 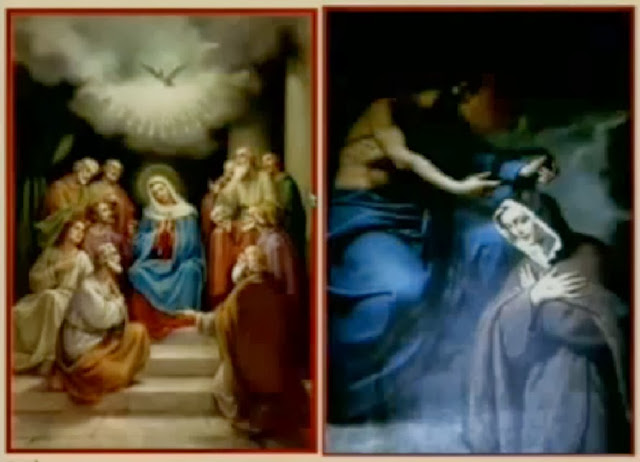