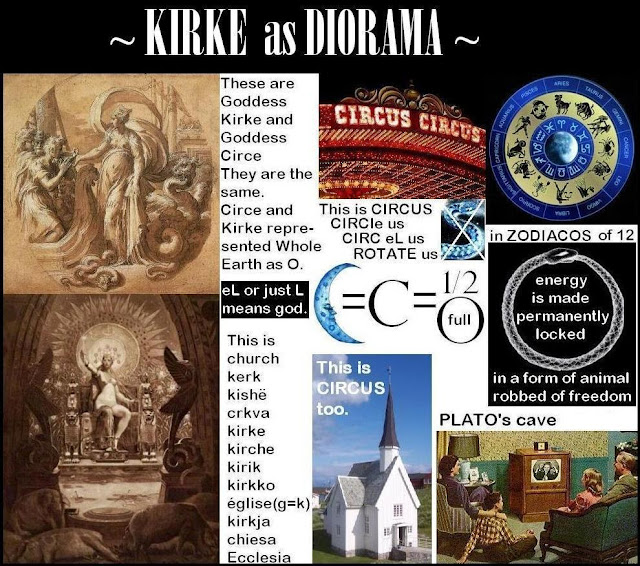 
"C" and "S" and Language as a SPELL of Bait and Switch; Of Hindu S-nakes as symbols of Essential Energy, Greek Zodiac Circles, Latin Angles, English-Victorian ANGLE-ANGELS, and Anglo-Saxon English SPELLS. It is highly con-CENTRA-ted reading which needs to be slowly examined or digested over time, or meditated upon, or 'seen' or savoured with an 'occult' understanding. So eitherdigest it very slowly, or see it in a flash.

CIRCE as CIRCUS is a CIRCLE or RING where animals are made to perform to entertain people. ((Please compare CIRC- LE as CIRC- EL and EL as GOD ((EL means God)) though really Circe is a God--ESS as encoded into the letter "S" as the sound denoted by the alphabet letter; but the sound 'ess' is also encoded into the alphabet letter "C" which as CODE, re-presents the ((feminised)) CRESCENT Moon as the letter -- C -- which note, is only HALF of a CIRCLE or Cirque-EL.

Thus as either "S" or "C", CIRCE indicates god-ESSence, or even 'source of god', which is also connoted by her ESSential "S" (see Lady Oracle, oracular, snake-hissing) SOUND (see Physics: wave, vibration, resonance, emanation) and encoded into the alphabet symbol letters "C" or "S" as representative of the Lunar Crescent and HINDU Snake symbolism; Kunda-lini as Kunti or CUNTI, the Cunt-blood-line; therefore CIRCE is encoded as the very SOURCE-of-God in this C/S symbolism; if not in her actual" blood-line", then as Kunti-lini or Snake-energy or even snaking energy, due to the "S" forming a 'wave' pattern (compare Physics); CIRCE then, represents essential energy encoded into "C" and "S".

But "C" is re-corded ((compare counting-rope, church beads, musical chords)) as re-encoded into Church-Latin by an ANGULAR "L" - or EL, or as a God with all its curves removed. (Curves=Kurva=Whore in Hung-Arian). In this way CIRCE was transformed from her God-ESSence as represented by the Lunar symbol "C", or by "S" representing essential "snake-energy", into an Angular "L" or EL connoting the new LATIN God -- a god with no curves, an "L" pronounced as EL; thus the letter-symbol "C" became an EL or "L", or GOD. ((also compare French El ' etre; source));

He-brew "HE" is a mere extraction from the so-called 'sacred name of god -- Y-H-V-H -- which contained both sexes, but which is also similarly reminted as a HE-god -- but "He" as -- ' -- is a code letter which actually denotes SILENCE. coded into the words Angle and Angel (same word). English-Anglo-Saxon ANGLES as angels -- therefore not as the god-EL))

Circus is the same idea as the ASTROLOGICAL ZODIAC (Greek Zodiakos) where animals -- a Ram, Bull, Men-as-Twins, Crab, Lion, Man-as-VIR-gin ((Latin vir = man)), Snake ((Ophiuchus, removed as the 13th lunar sign)), Saggitarius as Mino-TAUR, ((Minoan bull, taur means bull)) a 1/2 Goat-1/2 Fish, Pisces as two FISH, all TURNing a-Round the Zodiak (Zodiakos) Chart or Circle of CON-Stellations turning around in the sky above, which is also a device used to entertain people).

Zodiac is from Greek ZODIAKOS - a circle which was a device made with paper, in shapes of animals made to turn around a flame casting shadows on a wall or surface -- so from this we see the ZODIAK Greek ZODIAKOS. The ASTRO-logical zodiac or CIRCLE of Animals - + Seen as the "PERFECT FORM". Basis - Plato's Cave, with flickering imagery cast on the walls, while the chained humans do not see the real source of the imagery passing behind them.