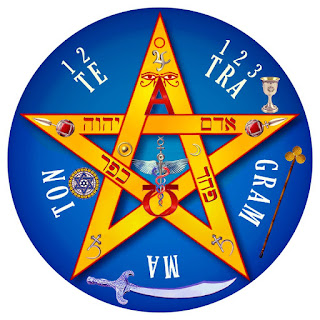 The Secret Name of God is not much of a secret any more, since as we can see here on the ROTOR, Greek "Gramma" herself may have been the original or ora-gynal source of Writing, Art and sundry Notes. However, at some point things got quite Turned A-round so that now all things are quite clearly spelled back-words on the ROTOR.

The TETRAGRAMMATON Pentacle symbol at the top of this page contains a mixture of Hebrew, Greek, and Latin, providing a real clue to the true intention of this exploration -- which is to de-code all language and symbolisms by presenting them in a new light for all to see THROUGH. This "magic" pentacle diagram reveals an encoded phrase, which is de-ciphered into English as "grammar, art, and music" -- the real magical "keys" used historically to re-shape or shape-shift our thoughts in order to create the World itself in the I-Mage De-Sired by the Pa-Tree -Arches.  This mechanism of TWISTING symbolisms endlessly in order to shape human EYE-Doll-atry and I-Dea-S (S= serpent = symbol of energy) is also em-bodied in the artist's message in the above painting. The artist's intention here is not to stimulate hatred between cultures, but rather, to reveal the twists and lies embodied into all re-ligious myth !!!! 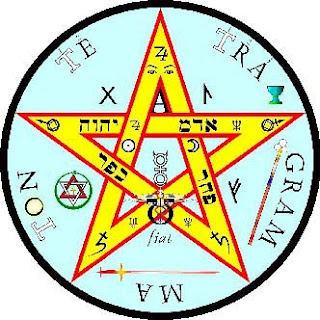 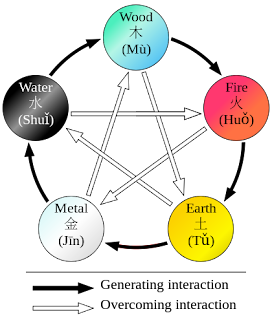 Popular beliefs on pentagram
"The pentagram expresses the dominion of the Spirit over the elements of Nature. We can command the elemental creatures that inhabit the regions of fire, air,
water, and earth with this magical sign.

"Demons tremble and run away terrified in the presence of this terrible symbol.

"The pentagram with its superior ray aiming up forces the tenebrous ones to scatter.

"The pentagram with its superior ray aiming down serves in order to call upon the tenebrous ones.

"When the superior ray of the pentagram is aiming up towards the sky, it represents Christ.

"When the two inferior points of the pentagram are aiming up towards the sky, it represents Satan.

"The pentagram represents the human being in its entirety.

"The pentagram with its superior ray aiming upwards is the Master.

"The pentagram with its superior ray aiming down and its two inferior angles aiming up, is the fallen angel. Thus, every fallen Bodhisattva is the inverted flaming star. As a matter of fact, every initiate who allows himself to fall becomes an inverted flaming star." - Samael Aun Weor (Hebrew: סמאל און ואור)


The five Impressions of the Great Light are found represented within the esoteric pentagram.

The Gnostic pentagram is the human figure with four limbs, and one unique apex which is the head.

The sign of the pentagram is also called the sign of the Microcosm. It represents what the Kabbalist Rabbis of the book Zohar call the Microprosopos.

When the superior point of the pentagram is pointing up, it represents the Savior of the world.

When the two inferior points of the pentagram are pointing up, it represents the male goat of the Witches’ Sabbath.

A human figure with the head pointing down obviously represents a demon, that is to say, an intellectual subversion, disorder, or madness.

The pentagram, which in Gnostic schools is known as the flaming star, is the sign of magic omnipotence.

The entire Treasury of the Light is contained within the pentagram, and allegorizes the Human Being.

The comprehension of the magic pentagram is the key of the two Spaces.

How to Make a pentagram

The sign of the pentagram must be composed of the seven metals, or at least traced in pure gold upon white virgin marble.

The pentagram with its superior ray pointing up forces the columns of demons to scatter.

The pentagram with the two inferior rays pointing up attracts the tenebrous ones.

When the pentagram is traced with charcoal on the floor of the threshold (entrance) of the room, with its two inferior rays pointing towards the outside of the room, it does not permit the entrance of the tenebrous ones.

The pentagram must be consecrated with the four elements, while reciting the exorcisms of fire, air, water and earth.

Five breaths must be blown upon the magic pentagram figure.

The flaming star must be sprinkled five times with ritual water.

The figure of the pentagram must be dried with the smoke of five perfumes: frankincense, myrrh, aloe, sulfur, and camphor.

Afterwards, the pentagram is placed on the floor, alternating successively to the North, South, East and West.

The name of א aleph and the sacred name of ת tav must be uttered, united in the Kabbalistic name of Azoth.

While blowing the five breaths upon the flaming star, the five magic Helpers Gabriel, Raphael, Uriel, Michael, and Samael, must be invoked.

Symbols on the pentagram

The Blazing pentagram, the flaming star, the sign of Divine omnipotence, the ineffable symbol of the Verb made flesh, the terrific star of the Magi, is also named Pentalpha because it contains in itself five Alphas, that is to say five letters “A” within its five angles.

PENTA = Signifies Five in Greek.
ALPHA = First letter of the Greek Alphabet.
GRAMMA = Graphic or Letter in Greek.
Around the Pentalpha we find the word TETRAGRAMMATON.

TETRA = Signifies four in Greek.
GRAMMA = Signifies Graphic or Letter in Greek.
TON = In the Greek language at the end of any word, denotes the union of two, three, four, five or more unities or letters in one single name or unity.
Therefore Tetragrammaton is the magic word or Greek “mantra” of an immense priesthood power that synthesizes in one unity the four Kabbalistics letters (יהוה Iod Hei Vav Hei) that in kabbalah are utilized to name divinity.

From right to left is written Iod, Hei, Vav, Hei, these are pronounced Jehovah or better said, Iod Havah. The Luni-Solar Androgen, the Father-Mother, our interior, particular individual Monad.

From right to left is written אדם Aleph, Daleth, Mem; these are pronounced Adam, the hum-manas or Celestial Man made in the image and likeness of God.

From right to left is written Pei, Chet, Daleth, these are pronounced pehad, which means "awe, ardor" and is a synonym of the Hebrew word יראה "reverence and profound respect" towards “Shaddai El Chai” the essence of God (the ens seminis). "The beginning of wisdom is the ardor, awe (פחד or יראה) of Jehovah." [Proverb 9: 10]

Every place whereon the soles of your feet shall tread (with chastity) shall be yours: from the wilderness and , from the river, the river , even unto the uttermost sea shall your coast be. No (fornicator) man will stand himself in your presence; your dread and your fear (פחד Pechad) do יהוה your Elohim put (flows) on the face of all the earth (physicality) on which ye tread (with chastity), as He hath spoken to you. - Deuteronomy 11: 25

From right to left is written כפר Kaph, Pei, Reish, these are pronounced Kaphar which means "expiation"; that is to say, to die in oneself and to make supreme sacrifices in order to expiate or to pay our karmic debts. The blood (fire) of the Lamb of God expiates the sins of the world.

In the superior angle of the pentagram we find the eyes of the Spirit, the eyes of the Father are always open. Internally they symbolize the infinite, the Holy Eight, the equilibrium between brain, heart and sex. The Omniscient and permanent sight of God is always present in all creation. The Divinity, the Internal Christ, is always awake and vigilant.

The letter A “Alpha” is the first letter of the Greek alphabet. It is located beneath the eyes and form its mouth; it symbolizes the Verb or Word, the principle of creation. “In the beginning was the Word, and the Word was with God and the Word was God”.

The letter Ω “Omega” is situated between the legs and opens inward and upward. It is the last letter of the Greek alphabet, and symbolizes the Cosmic Christ or Universal Verb, the Prana, that when transformed by the metabolism of the body, finally remains deposited in potency, within the Ens Seminis, as Christ in substance.

The Internal Christ is the Alpha A and the Omega Ω, the beginning and the ending, that is, was and shall be. The ending is equal to the beginning plus the experience of the cycle.

The Pentalpha as a whole, the Man God, the Adam Christ, the Alchemist and Kabbalist, is the outcome of the nine: sex.

The sign of Jupiter on the superior angle (forehead) of the pentagram: symbolizes IO-PITAR, the Internal Christ, Sacred Father of all Gods. : Zachariel.

The sign of Mars on its arms: is the symbol of strength. It is the strength of willpower that transforms the human being. : Samael.

The sign of Mercury on its chest: is the symbol of Occult Philosophy, the Intelligence, the prudent activity of the wise. : Raphael.

The sign of Saturn on its feet: is the symbol of Magic, Death and Resurrection; the Elder of Days. : Oriphiel.

The sign of Venus on its chest: is the symbol of Love, Chastity and Beauty. : Uriel.

The sign of the Moon on its left side: is the symbol of Fertility, fecundity, dominion over the waters of life (the Ens Seminis). : Gabriel.

The sign of the Sun on its right side: is the symbol of the Solar Logos, substance and conciousness of Christ, powerful life whereby everything advances.Archangel: Michael.

The Seal of Solomon symbolizes the dominion over the element earth.

The superior triangle of the Seal of Solomon symbolizes: The Father, the Son, the Holy Spirit.

The inferior triangle of the seal of Solomon symbolizes: The Power that Governs (The Innermost), the Power that Deliberates (The Mind), and the Executive Power (The Personality).

The Caduceus of Mercury: symbolizes the dorsal spine and its two “nadis” or channels: Ida and Pingala, through which the soul of the mercury rises. The latter ascends, after it’s fecundated by the fire of the Holy Spirit (by means of scientific chastity, represented in the sign of Venus - in the center of the pentagram - made by the Caduceus together with the circle which is below the sign of Mercury) and goes through the medullar canal (Shushumna), opening in its path the seven churches (seven chakras) which are mentioned in the Apocalypse of Saint John, and unfolding the igneous wings that allow us entrance to all the departments of the kingdom.

The chalice, the Holy Grail symbolizes the element water, the “yoni” or feminine sexual organ, and also represents the christified mind which contains the wine of light that inseminates the brain.

The staff of seven knots or the key of science, symbolizes the air. It is the vertebral column with the seven chakras. It is the spinal medulla through which the seminal vapors rise. It is the wand of Moses, the rod of Aaron, the staff of the patriarchs, the reed of Brahma, the scepter of the kings or Malachim of Nature.

The sword: Is the phallus- “lingam” or masculine sexual organ, symbolizing willpower, the dominion over the fire.