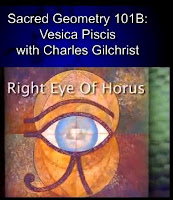 
"How does one start blabbering about a "he-god" while referencing a Universal Womb?"

Sac-red Geo-meter-eye. The "Root principle" is a Vesica Piscis. A Womb. A Container. A Red Sack. A Bag, which is also a derogatory English-language euphemism for a whore or woman (Hora). So right there, Gilchrist is telling us that our 'origins' or the "Uni-Verse" is accepted as being FEMININE in ma-thema-tical Sa-cred Geo-meter-eye.

But then look -- see how that video graphic above depicts an Egyptian Eye symbolism -- but note, it is only ONE EYE, and it is the RIGHT eye. This video CLEARLY demonstrates the gaping flaws in the essential premise of "ma-thematical" thin-king, which, simply stated, is that we can understand the W/HOLE by taking it apart, by dissecting it and then re-connecting it in many other ways through the de-vices of our "sacred mathematics" -- supposedly "sac-red" or "holy" because they reference "G-O-D" .

While Gil-CHRIST refers us to the UNI-Verse (< Latin, ONE-Verse, which is a SINGULARITY) as a WOMB (a 'container' or 'vessel' ) he then asserts blatantly that this Uni-verse or One-verse is CREATED by the mechanism of melding TWO CIRCLES (a DUALITY) which THEN create a SINGULAR Vesica Piscis via their UNIFICATION. These TWO circles are JOINED by TWO POINTS which FORM a "common radius" which they NAME as a Vesica Piscis or WOMB of the Uni-Verse. Confused yet ?? You should be. Yet this is all stated as LOGICAL !!! Gilchrist also fails to mention where these TWO circles and TWO points arise!

The term "Vesica Piscis" (Fish Vessel or Fish Sack) is Latin, therefore indicating its origins with the Christian Church, automatically making it quite 'fishy' (suspicious). However, in diverting us swiftly in this presentation towards an acceptance of the Vesica Piscis as the "basic unit" of the Uni-Verse, as the essential motif of all life, Gilchrist totally ignores the TWO CRESCENT shapes which are also created by this melding of his "Two Circles" in this formulation of the Vesica Piscis; and that is what everyone has to recognise right off the top -- how our attention is deliberately focused on accepting what he TELLS us, while he ignores other extraneous "factors" -- this is the great flaw in "scientific method". As he goes on with his spiel, he leads you down his 'path' to the false B-Leaf or 'know-ledge' of this "Ma-Theme-A". And then he moves us onto a revelation that there are five vesicas in the schema -- voila -- there is "magic in numbers" !!

A "football-like shape" and then The Big Bang -- LOL !!! He gives THAT away right off the top of his presentation?? Yep -- Ma and her "vesica" have definitely been kicked around like a football ever since Christ as a cowboy rode an ASS into jeru-salem. An ass is The Body in occultism. And football is a high ritual, full of "sacred geometry" in all its measurements of the field, the number of players, and the ball itself, made of pigskin.