meanings of Slaven or Sloven translated in english are;
Slaven means Glorious, Celebrated
Celebrity in Slavic would be "slavna osoba"

Slava is a home deity which we know are original Illyrian customs,
pagan custom is kept today by Macedonians and Serbs
Slava that lasts 3 days.


Sloven means 'literate', those that can read and write
and is bicomposit of SLOVO - letter
and VEN - Vendi, Vandal, Venti, Anti
on Anti;
In ancient scripts there is notable absence of letter V which was then considered as special form of vowel ,same as Aleph (A) and Ayin (O) and few others that were not pronaunced and nobody knows what their sound was.
It should be writen as 'Anti or 'Enti or 'Eneti.

Most important Goddess of Slavs is Rhea Silvia or Illa.
Illa Rhea Silvia is Illyria Slavia

Legend goes that she fled Troja during Trojan war and swimmed to the other side of the Adriatic and formed a city which she named and that name was later forbidden by Damnatio memoriae.
City in question is todays Rome who also claim she was mother of Romulus and Remus, two boys, which is not true, she give birth to twin girls because oldest coins clearly show girls.

I wrote about them earlier, article;
http://fishcalledsanda.blogspot.be/2014/03/she-wolf.html

Those same girls have other version in the Kabiri cult of Anatolia.

Troja was situated in land called Lydia which means land of Ljudi- meaning people in South Slavic tongue, dialectal diffences have other two versions, Dalmatian version is Judi, while some Slavic tongues have the same Ludi or Ludzie (polish), Lidé (Chech) etc.
Ila in Dalmatian tongue is undesputable word for Earth or Land of red clay quality.
Ila as soil is used in other s. slavic languages as Ilovaca only for red clay which is considered unfertile or 'Jalova'. 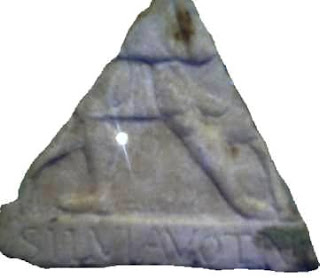 Rhea Silvia or Ila
Found in Ilidža near Sarajevo
At this stela script says;
SILVIA VOTNI - Silvia Vodeni
meaning is Silvia Leads and Waters in sense of a river stream.
Vodin was name of pagan Slavic god.
Vodja is a leader.
Vojvoda is battle (voj) leader (voda)

Name Slaveni / Sloveni is anagram of Silvan , Rhea Silvia, Sylvia as forest and Salvia as saviour.

Ila in Slavic means red clay earth or soil.
It is in usage in form of Ilica or Ulica - a street.
Ilovacha is more common term

In slavic tongue river and word have same rooth RiKa/ReKa regardless of ikavic or ekavic dialect.
This pattern will repeat on all counts when these two simingly separate
words will come to observation.
Other astonishing aspect of Slavic is that
water - Voda
word - Veda
leads - Vodi
heal - Vida
to see - Vid

other Water god is Wodanaz
also called Wotan, Bodin in runes or Odin or in old Norse Óðinn
Letter ð is Slavic đ, this letter is used when yotting process was introduced in grammar.
It is deminutive by nature as if you were 'sweet talking' to a small child.
Leader or Vođa is version Vodja or Vodya, in past tense one will be Vođen - lead.
Wōden,  Wōdan,  Wuotan or Wōtan, all stemming from the reconstructed
'Proto-Germanic' theonym *wōđanaz.
There is absolutely no root of this word in germanic tongue, germanic word for water is wasser.
Word wasser does stems from Slavic VODA because D=T but also in some instances T=S.
In ancient Slavic letter-symbol V that represents vulva
use to be regarded as most high so it was not always marked in scriptures.
Same pattern goes for all vowels and few more letter-symbols that are regarded today as consonants but really are not so. Grammar have never been that simple. 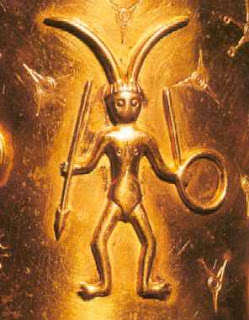 very old Wodanaz with "shen ring" and horns
his relatively young age shows that he took her qualities.
Oldest shen ring is in hands of Inanna, two of them and horns...
well, Lunar symbolism is that of a woman.

Forbidden name of Rome is Iliya
Aelia Capitolina (/ˈiːliə ˌkæpᵻtəˈlaɪnə/; Latin in full: COLONIA ÆLIA CAPITOLINA) was a Roman colony, built under the emperor Hadrian on the site of Jerusalem, which was in ruins since the siege of 70 AD, leading in part to the Bar Kokhba revolt of 132–136 AD. Aelia Capitolina remained the official name of Jerusalem until 638 AD when the Arabs conquered the city and kept the first part of it as 'إلياء' (Iliyā').

Following the Bar Kokhba revolt, Emperor Hadrian combined Iudaea Province with neighboring provinces under the new name of Syria Palaestina, dispensing with the name of Judea.

Till the time of Constantine, and for at least two centuries later, Aelia remained the official name and usual geographical designation ; was still longer continued in Christian writings; and even passed over into Arabic as "Iliyā"

Rhea Silvia as Vestal Virgin
Vesta in Slavic Dalmatian tongue means a dress.
Dalmatian tongue is proclaimed dead language which is not true, all Islanders still speak common Dalmatian and some remember even older version called Gan Vejan.
People from Dubrovnik for sure call dress Vesta as they always did.
Derivatives of Vesta are Vestit - a male "sunday suit" worn for special occasions,
it meant folk wear in the times this word was widely used.
Fustanela worn by ancient Macedonians was pleated white linnen skirt.
FuSTa = VeSTa
V is interchangable with F.
Fusta-NELA extension means small or mala
but it is also a female name Nela.
Fustanela is simply small dress.
in old Dalmatian amount of high nazal N is more frequent then lower nazal M.

I suppose that Vesta is nothing else but tunic
known as Dalmatica worn by Popes from both Romes and Jewish Rabi.

Term nevista or nevesta is used for a bride.
Reason she is ne-vista or ne-vesta is cause she is no more a virgin.

Višta or vešta means also a skillfull one that have a 'know how'.
Word Vištica or Veštica means a witch.
Sudski vještak / veštak is a legal person that assists lawfull handling of properties.
Croatian spelling added letter J instead of I and Y which is evident in old works.
so that in old grammar Sudski vještak would be Sudski vieštak. 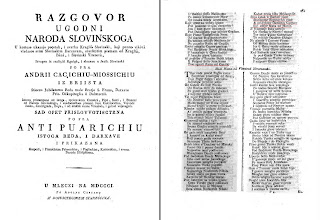 Diocletian Tetrarchs.
This form of fustanela may be made from different materials so it was probably inspiration for "Roman skirts" or skirt of leather or fabric strips or metal are also idea that stems from pleated dress. 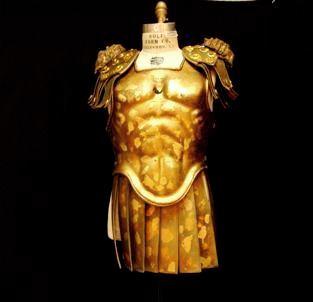 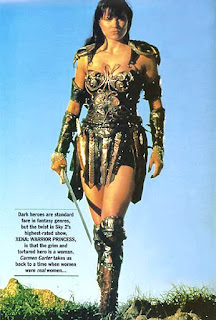 Leather and metal fustanela
I choose Xena, she is prettier and besides she really is  ЖЕНА or  ЖЕNA
in Slavic tongue it means a  woman. 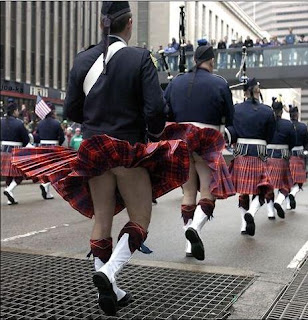 I think I know where word "skirt" stems from.
first;
Scirtari
Scirtari were an Illyrian tribe.
Scirtari were part of the Pirustae.
The Scirtari had 72 decuriae.
second;
Dardani as in Tartan
The Dardani (/ˈdɑːrdənaɪ/; Ancient Greek: Δαρδάνιοι, Δάρδανοι; Latin: Dardani), or Dardanians (Δαρδανίωνες) were a tribe which occupied the region that took its name from them of Dardania, at the Thraco-Illyrian contact zone; their identification as either an Illyrian or Thracian tribe is uncertain. (this is always used as excuse to surpass Slavic language)
I think that term 'Kilt' stems from Khaldean language and religion going far back to H'armenia and Herm (Anatolia) which would implay that weaving patterns are form of language. (just an idea)

Scytian
To this point of the story i wandered of, in Slavic
i would say SKITAla which is exact meaning of Scytian,
to wander, to be free, to have no limits nor borders.

Scytians are known for their 'traveling with Wolves'.
Wolf is a night creature and closely related to the Luna.
As all other females on earth she-Wolf and Luna are unseparable.

Stream of Worling Words Lead me far and astray along the River stream of big Waters.
Word is only a drop in the Sea, still being just drops in waves. 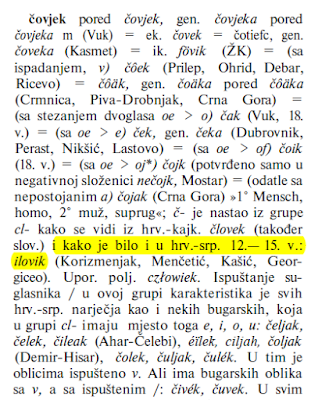 between 12. to 15. century so called 'Serbo-Croatian' language
(properly they are both Illyrian languages as are many other branching Slavic languages)
men was called ILOVIK.

S stands for the god Veles who was a snake
Vel is a VAWE in the first part of the name,
eS is singular male noun extension
VeL also means a Veil
VaL is a wave
reversal LaV/LeV means a lion, Illion alternative name for Illyria
Illiad as name of Homer's epic contains Illa and Iada or Iata (oldest name of town Zadar.)
or better yet god known as epithet of God ZEUS
Welchan(os) is both Veles and Velikan (giant)
and Zeus was a snake god, off course,
he stole it from the wavy-snaky Goddess above. 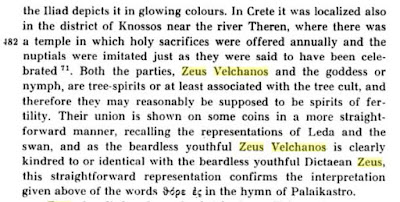 ChLowek is cognate to word Čelnik, described bellow in organisation of SELO or Village. 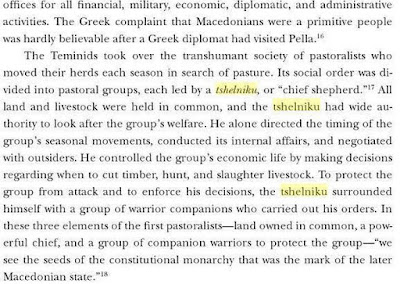 Goddess Nike have function in Slavic tongue as winning aspect. 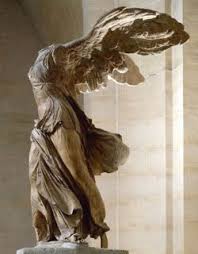 off course, modern Greek have it's own NIK's but all these words are Slavic because roots in Slavic branch immensely while modern Greek language have no natural sequence, words are just names for things or deeds, meaning is lost.

ΝΙΚ looks like νιϰ -  VIK in 'latin' alphabet
this is why  Nike is Victory , merely a spelling problem. 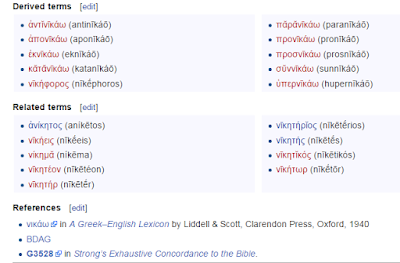 Winged wolf in Orthodox Christian Church is called Paraskeva, she is friday or fifth day of the week.
ParaSkeva is bicomposit from Para-pero-perje-feather and
(s)Keva is female dog but most likely she Wolf because in Serbian naratives she is remembered as Mother Wolf.
All words with K in Slavic tongue have been depleted
with separation of SK and further branching in S or K words.
bitch in slavic branche
in wit russian, ukrainina, polish сука - Suka is bitch
in chech and slovak - Fena is bitch
in macedonian - Kučka is bitch
funniest is latin for bitch, it is Gloria - which is one of the meanings of the word Slavic

meanwhile in Russia...
depiction of Paraskeva 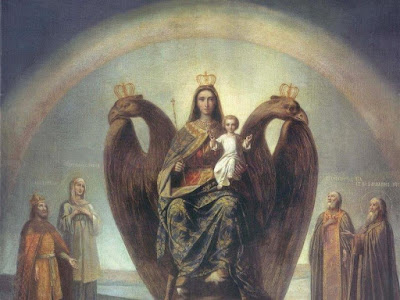 Skiti Bogoroditsa
From Wikipedia, the free encyclopedia
Bogoroditsa is a Skete (smaller, dependent monastic houses) of the Agiou Panteleimonos monastery (Monastery of St. Panteleimon) in the monastic state of Mount Athos, Greece.

The Skete is situated in a forested area, between the monasteries of Vatopedi and Pantokrator. It is inhabited by Bulgarian monks and it follows the coenobitic way of monastic life. The complex became a Skete in 1818 and today has a main churches and secondary chapel.

Bogoroditsa lies on the site of the pre-existing monastery of Xylourgos. Xylourgos (meaning Carpenter) had been a fully, independent Russian community known from as early as 1020. The majority of the community moved in 1169 to the Monastery of St. Panteleimon, but Xylourgos continued to thrive through the 11th and 12th century.

Now pay attention!
The Kyriakon is dedicated to the Assumption of the Mother of God.

And once again he assumes her place.

Do I have to mention that women can't visit Athos?

There is notable conflation of daughter-woman-bitch expressions
in both ancient and modern Slavic languages.
Other example is Korai;

in Macedonia - as CER(es) or Korai,
Kera - also slavic for female dog in modern Macedonian,
ќерка-kerka in todays Macedonian
or kći, ćerka, kćerka in S. Slavic languages
with baby at her breast, 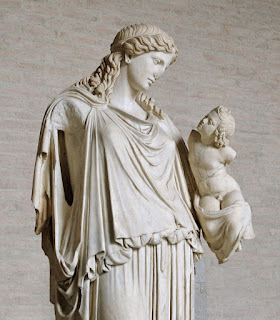 or as IRENE, one of the Horae or Korai
the goddess of peace, with the boy
PLUT(US) - PLOD in slavic tongue - in her arms. (T=D)
Word PLOD is used for child still in uterus in slavic
and PLODNA VODA for fertile water surrounding baby.
PLOD is also general word for fruit and vegetables and as epitet for fertile Earth.